I have 5 laptops for a reason.  They are loaded with old software for client projects.  An example is a client had a Omron analog input module go bad on them (no power lights).  It was a remote DeviceNet module I had installed for them in 1999.  Replacement part was 4-6 week delivery.  We decided to replace them with Advantech ADAM Ethernet I/O.  Not really a plug-in replacement but a newer design.  All DeviceNet I/O I could find seemed obsolete, limited or no stock and relatively expensive.

In order to do that, I needed to re-program the Omron DeviceNet master and remove 4 of the 9 nodes that were defined.  Easily said but the programming card I have is a ISA card.  I kept a Compaq laptop with a docking station with a ISA slot for this purpose.  I’ve used it a few times over the last few years.  This time the computer would not boot.  Just a flashing orange light.  No BIOS page.  Reseated the memory SIMMS but I think it’s really dead, as I should have at least a memory test fault.

So I look for an old desktop that had a ISA slot.  First one I booted had Windows 95.  That seemed too scary to proceed.  The second one had Windows 98.  I loaded the software.  No card detected.  I had to pullout the old manual. Luckily I wrote inside IO addr 280, memory D000.  Oh so ancient.  But the software came up.  I read out the old config and went to load the modified config.  Error “Module in an invalid state”.  Then I remembered I need to put the PLC in the program state.  No keyswitch so I need the software.  It is only loaded on my very first laptop I owned, Hitachi with Windows 95.  Yeah still boots.  Went in the software changed to program mode and finally downloaded the new module config.  I really feel I’m teettering on the brink of obsolence.

DeviceNet really lost out in the Fieldbus wars.  Not many left.  The trouble is most manufacturing equipment runs until it really wears out.  That can easily be in excess of 15 years.

Updating I/O technology I feel is going to Ethernet.  Ethernet/IP and Modbus-TCP are the ones I deal with the most.  I’ll need to evolve client’s systems as I can. 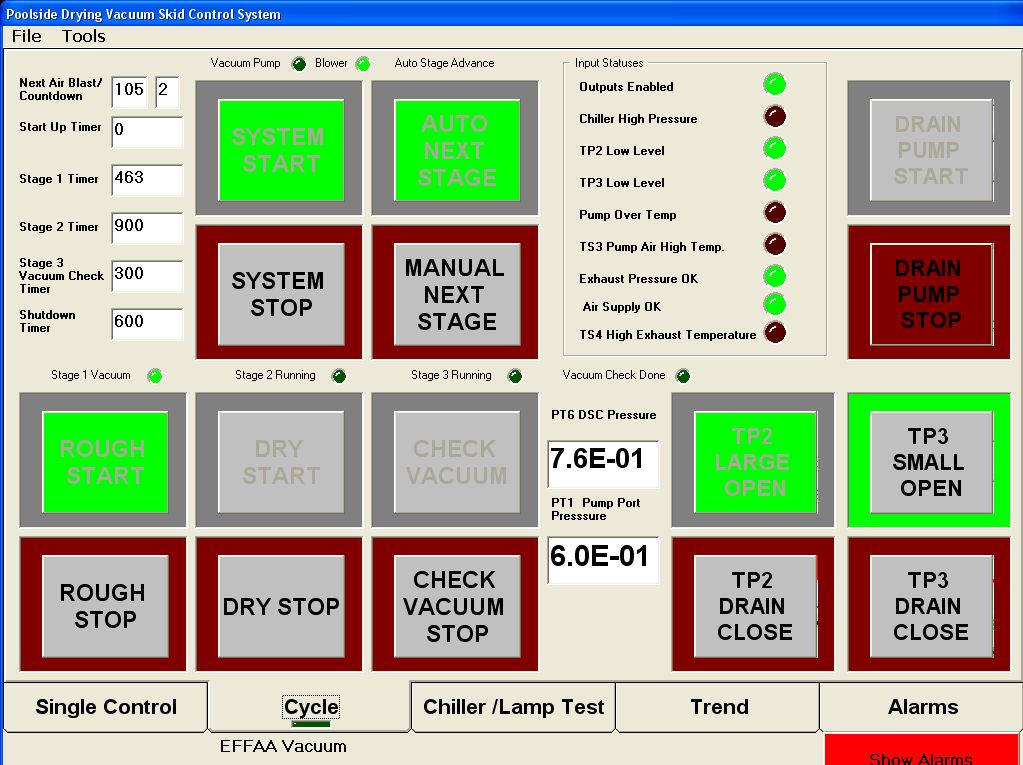 Redundant Cryo Bench Cooler for India Space agency. Used to test satellite components in a vacuum chamber. Some tests can run for months and requires 100% uptime all components were built as dual redundant, including PLC I/O and power supplies.

Dual Turbo Pumps evacuate the chamber attached to the flange. During pump out and cool down no strain can be placed on the flange a load cell connects to an Oriental Motor Stepper and maintains zero strain.

Systems is Programmed in Visual Basic with MS Access process and datalogging. Databases are periodically replicated to back-up storage and data servers.